The 2021 Canadian Screen Awards – Sports Programming will feature a look back at the moments and milestones of the past year in sports with a focus on the nominated work, featuring narration by World Champion, Olympian, Author, and television host Perdita Felicien.

Awards to be streamed live on July 20, 2021
Toronto, July 7, 2021 – The Academy of Canadian Cinema & Television (the Canadian Academy) announced today the nominees for the 2021 Canadian Screen Awards – Sports Programming in eight television categories. The awards will be streamed live on Tuesday, July 20, 2021 at 7:00 PM ET on the Canadian Academy’s Twitter and YouTube channels, as well as Academy.ca.
Hockey Night in Canada (Rogers Sports & Media) leads nominations with four, including Kevin Bieksa and Cassie Campbell-Pascall for Best Sports Analyst and Ron MacLean for Best Sports Host. The 2019 Grey Cup (Bell Media), BMO Nations Cup (CBC), and Road to the Olympic Games (CBC) follow with three nominations each. 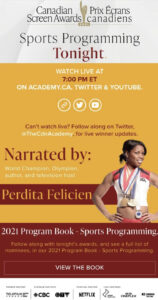 The 2021 Canadian Screen Awards – Sports Programming will feature a look back at the moments and milestones of the past year in sports with a focus on the nominated work, featuring narration by World Champion, Olympian, Author, and television host Perdita Felicien.

“The absence of broadcast sporting events in the first half of 2020 was acutely felt by all Canadians, leading to a new appreciation for not only athletes, but those who bring their biggest moments to our screens,” said Beth Janson, CEO, Academy of Canadian Cinema & Television. “We are honoured to rightfully celebrate the journalists, filmmakers, and broadcasters who told the stories which humanized the competitors that gave their all.”

“Through the darkest moments of 2020, sports broadcasters and journalists brought light, levity, and clarity to the world of sports, which so often holds a mirror to our society at large,” said John Young, Chair, Academy of Canadian Cinema & Television. “It is our immense privilege to bring well-deserved attention to these talented creatives.”

Owing to the pause in live sports due to the COVID-19 pandemic, the submission period for the adjacent Canadian Screen Awards program, craft, and performance categories were delayed to allow for consideration at the 2021 awards.

The Canadian Academy previously announced winners of the 2021 Canadian Screen Awards in 135 categories in a seven-part series of presentations that streamed live from Monday, May 17, 2021 through Thursday, May 20, 2021. Schitt’s Creek led television honours with eight awards for its sixth and final season, and film honours were led by Jeff Barnaby’s Blood Quantum with seven awards, including Michael Greyeyes in the Performance by an Actor in a Leading Role category.

The full list of 2021 Canadian Screen Awards – Sports Programming nominees can be found at academy.ca/nominees.

The 2021 Canadian Screen Awards, along with a list of winners in non-sports categories, can be viewed at academy.ca.

About the Academy of Canadian Cinema & Television

The Academy of Canadian Cinema & Television is the largest non-profit professional arts organization in Canada. We are dedicated to recognizing, advocating for, and celebrating Canadian talent in the film, television, and digital media sectors. Our more than 4,000 members encompass industry icons and professionals, emerging artists, and students. Collectively, we deliver professional development programs and networking opportunities that foster industry growth, inclusion, and mentorship.

Read the rest of the press release here.