Felicien’s ‘Raw and affecting memoir’ announced for One Book Lambton 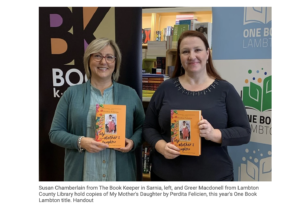 The book selected for this year’s community-wide reading project in Lambton County is described by organizers as a “raw and affecting memoir.”

One Book Lambton – an annual project by the Lambton County Library and The Book Keeper book store in Sarnia – announced the book local residents will be encouraged to read in the coming months is My Mother’s Daughter by celebrated Canadian hurdler and sports broadcaster Perdita Felicien.

“I am very excited about the choice,” said Susan Chamberlain, owner of The Book Keeper. “I love that it’s got a lot of meat on its bones as far as a story goes.”

Chamberlain added Felicien is “full of life and love and excitement.”

Felicien, a Toronto native, wrote the memoir about growing up with her mother, who arrived in Canada from St. Lucia, and the family’s experiences with racism, domestic abuse and homelessness.

“Most people know Perdita through her sports career,” but she writes in the book about the immigrant experience, homelessness, poverty, intergenerational and mother-daughter relationships and other experiences, said Andrea Basra, public services co-ordinator for the Lambton County Library.

“I think everyone can read this book and take something away from it,” she said. “There are just so many great topics in it, and it is a love letter from a daughter to her mother.”

This is the third year for the program where county residents are encouraged to read the same book and take part in programs and events exploring its themes.

A five-member committee selected the title from “hundreds of books” suggested and narrowed them down to a smaller list to read through before making this year’s selection, Basra said.

“Overall, this book is really uplifting and that’s something I think everyone could use right now, coming out of the really long pandemic,” she said.

The book was announced Friday and, by Monday, county library patrons were already reserving copies, Basra said.
Patrons can reserve copies of the book online at lclibrary.ca or by calling or visiting a library branch. It is also available as an ebook and audiobook.

“We always order extra copies to circulate through the communities,” Basra said.

The book is also available for purchase at The Book Keeper.

One Book Lambton programs and special events will begin in January.

Lambton launched its initial One Book project just before the pandemic began, which moved many of the events and programs online for its first and second years.

More than 90 people took part in the online projects last year and plans are for a mix of online and in-person programs in the New Year, including an April 22 author talk featuring Felicien, Basra said.

The first year for One Book Lambton, the library and The Book Keeper recorded more than 750 copies of the book selected were loaned or sold. The total the second year was 685 copies.

“We were really happy with those numbers,” Basra said.

The One Book initiative has been around for a number of years in other communities, including Waterloo, where it has been operating for about 20 years, she said.

“It’s about building community through reading this book together and exploring the ideas through the book together,” Basra said.
pmorden@postmedia.com