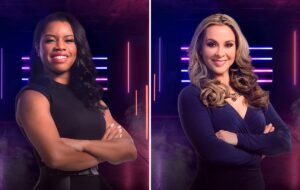 When the 2020 Summer Olympics open in Tokyo tomorrow, two Seneca graduates will be on your television, computer and phone screens with live event coverage and athlete stories.

Perdita Felicien, a world champion hurdler, and Andi Petrillo, an award-winning sportscaster, are part of CBC’s Tokyo 2020 broadcast team, working from its Toronto studios. Both women honed their journalism skills at Seneca.

This is Ms. Felicien’s third time covering the Olympics for the CBC. Following her retirement from competitive sports in 2013, she attended Seneca’s Summer Institute of Multiplatform Journalism to pursue a career as a broadcast journalist. During the Games, she will be co-hosting Tokyo Today with Andrew Chang from The National to recap major storylines, news alerts and profiles.

“I’m looking forward to giving our viewers that Canadian context and perspective and watching our athletes perform,” said Ms. Felicien, a two-time Olympian, 10-time national champion and the first Canadian woman to win a world championship gold medal in track and field.

“There are so many incredible stories about what athletes have had to do, and we want to show how they’ve overcome obstacles during the pandemic.”

Ms. Felicien has jumped over many hurdles in her life — on and off the track. Before she became a world champion, she and her mother overcame poverty, domestic violence and homelessness. Her story is detailed in her recently released memoir, My Mother’s Daughter.

“I have an emotional energy now,” Ms. Felicien said. “Writing the book was the only way I could heal and truly express and confront who I am.” 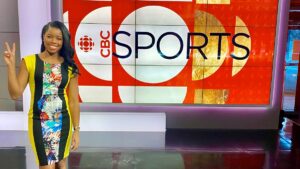 As an athlete, the biggest challenge Ms. Felicien faced was not being able to compete in the 2008 Summer Olympics in Beijing due to injury. That year, she was asked by the CBC to provide commentary for the Games instead and caught the broadcasting bug.

“It was meant to be,” she said. “I took that setback and turned it into something. I wanted the industry to take me seriously, and Seneca gave me the validation.”

Since graduating, Ms. Felicien has covered various international sporting events, including the 2016 and 2018 Olympic Games.

While things will be different for the 2020 Olympic Games — part of the CBC broadcast team will be in Toronto, with reporters and field producers in Tokyo — Ms. Felicien says the way viewers consume the Olympics won’t change.

“It’s the biggest show on Earth,” she said, adding that during her first Olympics in Sydney in 2000, she was treated like a rock star, swarmed by spectators wanting her autograph. “The coverage won’t be diluted, but you won’t have the same energy in Tokyo — you are going to miss that.”

Ms. Petrillo, who has been serving as co-host of CBC Sports’ weekly staple, Road to the Olympic Games, and will be hosting Olympic Games Morning, couldn’t agree more.

“I can already feel something’s missing because we are not there in Tokyo to get a sense of the vibe,” she said. “That’s a big one. The human connection and human emotion — that’s part of the Olympic experience.”

A veteran sportscaster, the Journalism graduate has covered many major international events, including the Pan American Games, the FIFA World Cup, and the 2014, 2016 and 2018 Olympic Games. 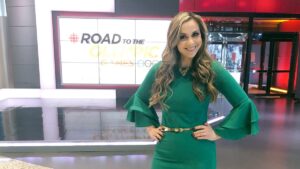 She describes the “Olympic grind” of getting ready to cover the “greatest spectacle in sports” as both exhausting and exhilarating.

“We are always staying on top of these stories,” she said. “But even though you have a plan, things can change on a dime. That’s why I do my research ahead of time. I write things down, so they stay in my brain. I always say, ‘I’m never nervous. I’m always excited.’ The only time I was nervous was when I wasn’t prepared. I never, ever, want that feeling.”

While many Olympic events are in individual sports, there’s definitely a team vibe to the CBC’s approach.

“I love to see everyone come together,” Ms. Petrillo said. “Everyone understands it’s no longer nine to five. It’s 24-7 for 17 days. It’s the comradery. We become the ultimate team.”

With this being a challenging year for many athletes — some have had no access to high-performance facilities or coaching staff, others no physiotherapists — Ms. Petrillo says she can’t wait to see what history will be made.

“The athletes are the show,” she said. “They are the beginning, middle and end. We always see incredible performances of determination. and I can’t wait to see who’s going to be that Penny Oleksiak or Andre De Grasse story, and who’s going to be the next Donovan Bailey.”

See and hear Perdita Felicien and Andi Petrillo and all the Canadian athletes in action on CBC.